Culture Guide to the Netherlands

Visiting another country can be compared to entering into a sort of fantasy land, where new and delightful sights, smells, and sounds are blended with a strange and eccentric way of life – one that is quite different from what you’re used to. It’s one of the most exhilarating experiences ever; however, it can be intimidating to the uninitiated.

The Netherlands is no exception to this truth. It is an amazing country with an even more amazing culture. But if you’re not properly prepared, you could possibly find yourself confused by some of their common cultural tendencies.

For this purpose, I have put together a sort-of cultural strategy guide for your visit to the Netherlands. It should provided you with the major essentials you’ll want to know to be well prepared to enjoy all that the Dutch culture has to offer. While this may not be an exhaustive list, I’ve made every effort to include what will most likely matter the most. Enjoy! 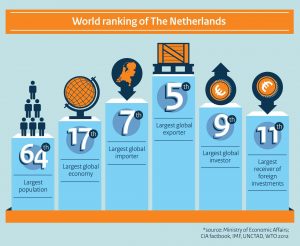 Languages. The official language of the Netherlands is Dutch, and it is spoken by a vast majority of the country’s population. It closely resembles German and borrows terms from both French and English. The secondary language of the Netherlands is Friesian, which is spoken by approximately a half-million citizens of the Dutch province of Friesland.

Society. The Dutch society as a whole is very independent and modern. Many believe in equality for all, yet focus on individuality more than community. They are considered a middle-class society.

Economy. The Netherlands has an advanced free market economy. The major sectors for employment are the agriculture, trade, and service industries.

Egalitarian. Respect from other Dutch citizens is not garnered via age or association, but by hard work and acquired skills.

Secular. The Netherlands is one of the most secularized countries in Western Europe. Only about 39% of citizens claim to be religious, and of those 39% only 6% attend church on a regular basis.

Minor Religions. Muslims make up 5% of the population. Buddhists make up 1%, and Hindus make up 0.9%. 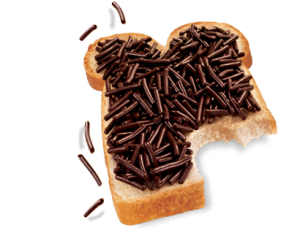 The average Dutch household prepares food from other cultures as well. The major influences are Italian, Chinese, Mediterranean and Indonesian. These same influences, and others, can be found among the Netherlands selection of dine-out restaurants as well.

Lunch. While lunch can include the same foods as breakfast, often times there will be sandwiches with different cold cuts and cheeses – Gouda, Edam, and Leyden. 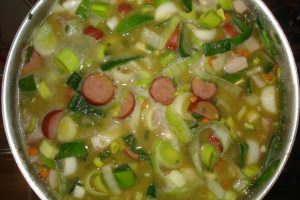 Dinner. Dinners in the Netherlands are typically a two or three-course meal consisting of soup as an appetizer, potatoes with a large portion of vegetables and a small portion of meat as the main course, and pastries or cookies for dessert. Stamppot (or, stew) is a traditional winter meal and snert (pea soup) is often times the soup of choice for dinner.

Culinary Staples. The Netherlands is famous for its cheese. Gouda, Edam, and Leyden are known worldwide, and Alkmaar is a town famous for its cheese market. Salted herring is another staple to the Dutch. Other staples include hagelslag (chocolate sprinkles), stroopwafel (caramel waffle cookies), French fries and mayonnaise, and pffertjes (small, thick pancakes).

Meal Times. Breakfast is served first thing in the morning between 6 and 8 A.M. Lunch is typically served 12 and 1 P.M. And dinner usually starts around 6 P.M. (early by international standards.)

Tea Time. Tea time is a combination culinary and social event. It typically takes place either between breakfast and lunch (10 to 11 A.M.) or lunch and dinner (4 to 5 P.M.). Tea time involves inviting friends and/or neighbors over for a spot of tea or coffee and a single biscuit or cookie.

Leaving the table. It is considered rude to leave the table during dinner for any reason, whether it is to take a phone call, use the bathroom, etc.

While Dutch etiquette closely mirrors that of the rest of the Western world, there are certain traits and practices specific to Dutch citizens. Keep in mind that what you’re about to read below may not be practiced in all areas and by all people. Instead, consider it a general guide to showcasing proper etiquette in a majority of circumstances and situations.

Greetings. The Dutch either shake hands upon greeting and departing (somewhat formal), or, if they have a close bond with the person, kiss the cheek three times, starting with the left cheek. A simple accompanying “hello” will suffice.

Scheduling. Don’t be surprised if a dinner with a Dutch friend is scheduled six weeks in advance. The Dutch live by schedules and are strict on adhering to them. There’s no such thing as stopping by someone’s home. It needs to first be agreed upon by the other party, and then properly placed into the schedule.

Manners. Dutch citizens are very straightforward and direct. What some people would call rudeness, they call it “openness.” They tell it like it is – honest and straight to the point. It’s not meant to be rude, it’s just their particular style.

Conversation. The Dutch maintain strong eye contact when conversing with others.

They are also very direct in their speech. Criticism is welcome, and most Dutch are not easily offended.

Speaking a different language. Do not be surprised if you greet a person in Dutch and they respond in English. The Dutch are very proficient at speaking foreign languages and they can easily pick up on foreign dialects.

Money. While the Dutch have nothing against becoming wealthy, it is typically seen as a negative character trait if you publicly spend large sums of money. You are labeled as a “show off.” Also, never ask someone how much money they make.

Driving. To put it bluntly, the Dutch can be impatient and rude on the road. Gestures, honks, and expletives are commonplace in many areas, and swift lane changes are also the norm. In other words, be prepared for an adventure if driving through the Netherlands.

Gift giving. If you’re invited to a Dutch home, it is customary to bring a gift for the hostess. The most acceptable gifts include flowers (always an odd number, and never thirteen), a book, quality chocolates, or a potted plant. The Dutch typically have a wine already chosen for the meal, so bringing a bottle as a gift is uncommon. 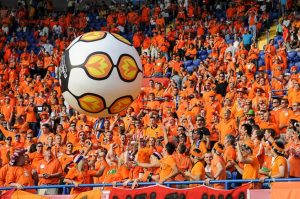 Sports are a very important part of life for many Dutch citizens. There are currently over 35,000 operational sports clubs in the Netherlands and approximately 28% of the population is active members in these clubs. Furthermore, there are still more of the population who are not members, yet are still very active in sports.

Major sports. The major sports of the Netherlands (in order of popularity) are football, cycling, and speed skating.

Football. Football is a way of life more many sports fans in the Netherlands. The Royal Dutch Football Association is the most revered football federation in the country and was one of the founding members of FIFA. Throughout the years, the Dutch have achieved several accolades for football, such as three bronze medals in the Olympics and three FIFA World Cup finals appearances. Johan Crujiff is the country’s most revered football player.

Cycling. The Dutch’s cycling boom started in the late 1890s and took off in the early 1900s. In 1928, the Royal Dutch Cycling Union was formed and cycling soon became a premier sport in the Netherlands, and has maintained its status ever since. There have been two Dutch Tour de France winners in Jan Janssen and Joop Zoetemelk, and seven have been crowned World Champion. No matter the terrain, open road, off trail, or track, cycling is still very popular.

Speed Skating. While footballs and bicycles take center stage for most of the year, when winter hits, speed skating becomes the undisputed king of sports. While the Dutch experienced some success in the early 1900s, it wasn’t until the 1960s, when speed skating titles became the norm for Dutch athletes, that the sport took off with the rest of the country. It hasn’t slowed down since. During the winter months it’s normal to overhear conversations about speed skaters, along with seeing fellow citizens strapping on a pair of skates for a race.

Other sports. While football, cycling, and speed skating are the main focus for Dutch’s sports enthusiasts, there are still other sports that remain fairly popular and are worth mentioning: basketball, baseball, volleyball, field hockey, cricket, rugby, and korfball.

Art. The Netherlands is world-renowned for its number of art and historical museums, along with its impressive collection of fine art. The most prolific period for Dutch art was the Golden Age (17th century), where the Baroque style, inherited from the Italians, became the basis for several Dutch masterpieces. The next resurgence began in the twentieth century with modern art and continues to flourish today. International art festivals occur year-round and draw big crowds from all over the world.

Architecture. Dutch architecture also became prominent during the Golden Age, where Baroque-style buildings were considered the norm. The end of the nineteenth century saw a resurgence of Gothic Revival architecture, and modern architecture found its place, starting in the 20th century. The vast array of buildings offers a magnificent view of varying historical styles that span centuries.

Cabaret. The Netherlands has its own unique form of cabaret that is aimed more at provoking thought on social and political themes, instead of laughter. Cabaret shows can be found in most cities and even on some television networks.

Events. The Netherlands is a hot bed for annual events in all different kinds of niches and markets, and the locals love to attend. For art there’s the Maastricht Art Show in the first half of March. The Amsterdam Roots Festival in June showcases music from the Netherlands and other parts of the world. For techno lovers, the FFWD Dance Parade is held in August. And Sinterklaas comes in December. 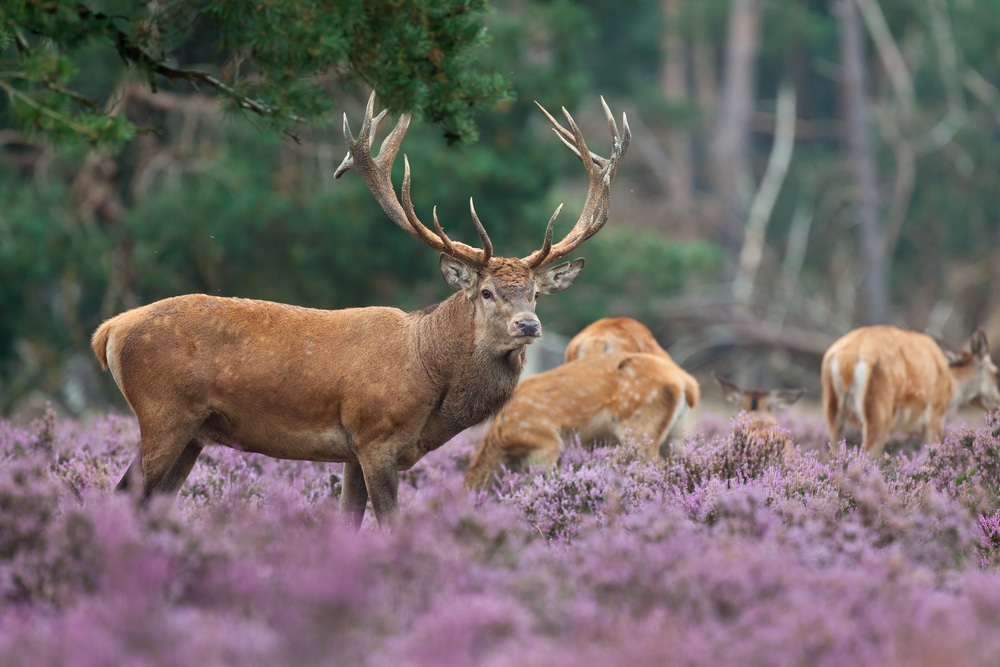 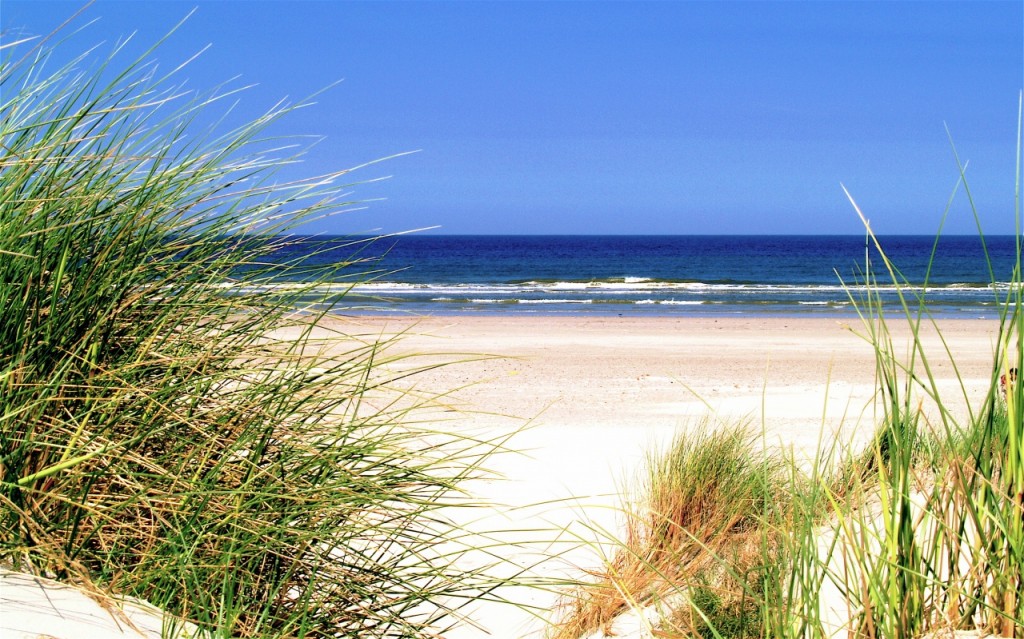